If You Don't Read The Squirrel That Dreamt of Madness You're As Mad As a Mad Squirrel Who is Mad Beyond Madness! 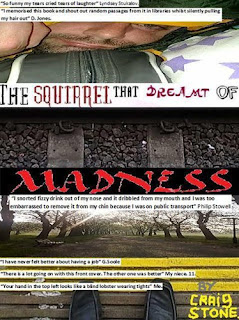 Do you ever wish you could quit your mind numbingly tedious job? Do you feel like you may be dangerously close to telling your employer precisely where you’d like them to lodge their pay freeze and patronising school type rules? Well now you need not have to follow through thanks to one guy who already did (well, he did the former). No voluntary redundancy was this but rather voluntary homelessness as Craig Stone set up ‘home’ in a London park in the guise of main character Colossus Sosloss armed with a 450 GSM sleeping bag from Argos, a pad and a pen. A rip roaring wondrous actual laugh out loud funny adventure ensues as he chronicles the days that followed in The Squirrel That Dreamt of Madness.

Reading the blurb on Amazon and a few of the reviews sucked me right into the world of Colossus and was enough for me to buy the book and find out more of what it was all about. I thoroughly enjoyed the white knuckle ride through Gladstone Park it whisked me off on, meeting such richly woven colourful characters along the way like the midget park keeper who ‘looks like two pillows tied together with old rope stuffed into a bag with a worried face drawn onto it by a gorilla with arthritis.’ There’s Moonface, ‘a fat ginger man up a tree that looks like a space hopper with anger issues’, not to mention Dorangel Vargus and PC Whirled amongst many others. There’s even a cameo from the voice of Stephen Fry as a human sized fox wearing a lab coat.

There should be a warning on the cover about reading it in the presence of others because you will end up laughing raucously at the turn of almost every page. A worthy example is the discussion about how it seems to be common for superheroes to turn bad in their third movie outing. Colossus asks if, ‘In Lassie three, will Lassie grow a beard, smoke cigarettes and push kids down wells and lock them in abandoned mines?’ The imagery this paints is a pure delight. And I can’t imagine anywhere else you’ll find a list of ways to kill a budgie some of which include, 'cooking them in a sandwich, drowning them in a bath (with weights), explode them and kick them in the balls.' From Colossus sized carrots to the intricately detailed description of how the animals communicate when trying to decide how to deal with the animal murderer stalking the park are simply sublime.

Humour is not all Craig has in his sprightly bag but trust me if it was he does it so well it would be more than enough to propel you all the way to the end still wanting more. When I could finally get my laughter under control I found poignant stories invoking feelings of sadness and pity. It was wonderful to have my emotions toyed with in a way that can sadly be missing in stories today. There are wonderful moments of philosophical clarity and observational genius. Other moments have a feeling of existential reflection about them which left me thinking, ‘Wow, this guy is so good!’ These moments echo thoughts on issues resonating with many of us as we tirelessly try to find our own place in a heavily saturated trend loving routine laden world; a world where anyone with an original personality is often pigeonholed as a geek, an eccentric or even a weirdo.

There is a flawless flow to the whole story demonstrated by the effortless way Craig goes off on several tangents while keeping the writing so eloquently cohesive. Not a word is out of place. Here is a writer with a unique voice, both distinctive and original making this not only a ‘must’ read for all but an ‘if you don’t read it you will pay for it bitterly in the afterlife (whether or not you believe in an afterlife is immaterial)’ kind of book.

Whilst a fast paced book one could happily read in one to a few sittings the overall vibe created made me want to savour it for as long as possible. Since completing it the withdrawal symptoms are worsening so much that if I don’t start a second reading soon I might just end up hitting that F8 key myself. Park wardens beware. Old ladies with missing dogs stand clear. Budgies….well just don’t leave anything in the cage with which your budgie may hang itself.

Just when you near the end and think it couldn’t possibly get better you’re faced with, what for me was, an interesting if unexpected twist. It really finished it on what was already going to be a mountainous high.

Come on people get clicking fast and buy this book because at such a bargain price for a cracking read why wouldn’t you? Then Craig can launch his next book which I’m now so eagerly awaiting.

'Better to live dreaming than dream of living,' and The Squirrel That Dreamt of Madness brings the dream right to you. I read a lot of books so it's fantastic to come across one so refreshingly new. Unfortunately I rarely have time enough to give books a second read but this is one I'll definitely be making an exception for.

So if you want to discover how Colossus ended up getting beaten up while dressed as a fish finger sandwich I urge you to buy this book! To wrap up I'll use the words of his landlord Ali who told him when he packed up his belongings and moved out, 'I will miss you Colossus Sosloss colossally.'

PS - Any writer managing to include the longest word in the English dictionary in their story ensuring it has a worthwhile place deserves all the success in the universe!!


Music of the moment:

1.) Whitestar kindly sent me two of their CDs through the post which are superb. A review will follow soon. Listened to the album From the Gutter to the Stars so far and loved it.


2.) Elliot Minor's self titled debut album - loved it when it came out and love it still. 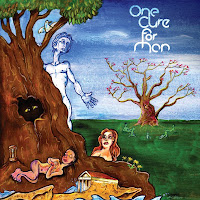 robertobaggins
Come with me on this wonderful journey through time & space..oh I already did that bit didn't I? (see first post) Okay well just read on because if you don't how will you ever know you didn't miss something vitally important for your continued existence. Expect temporal anomalies, spacial distortions & don't be alarmed if you see a badger playing banjo. That'll just be Valerie, the wisest badger in the west who can find solutions to almost any problem. He will then sing the solution to you whilst playing out a tune on his banjo. Just be grateful you're not seeing an elephant ski & if you are then..well...who knows what was in that drink you were given at lunchtime?